This morning we received an image of what appears to be the upcoming lower cost Peloton Tread. We’ve been expecting the announcement in the next few weeks, and based on this image surfacing, it should be soon! As a reminder, Peloton has been saying that they intend to have a “better/best” product strategy. The current $4,000 tread currently available for sale would remain available and be their “best” product. The yet-to-be-announced new lower cost tread (expected in the $2,000-$2,500 range) will be the “better” product. 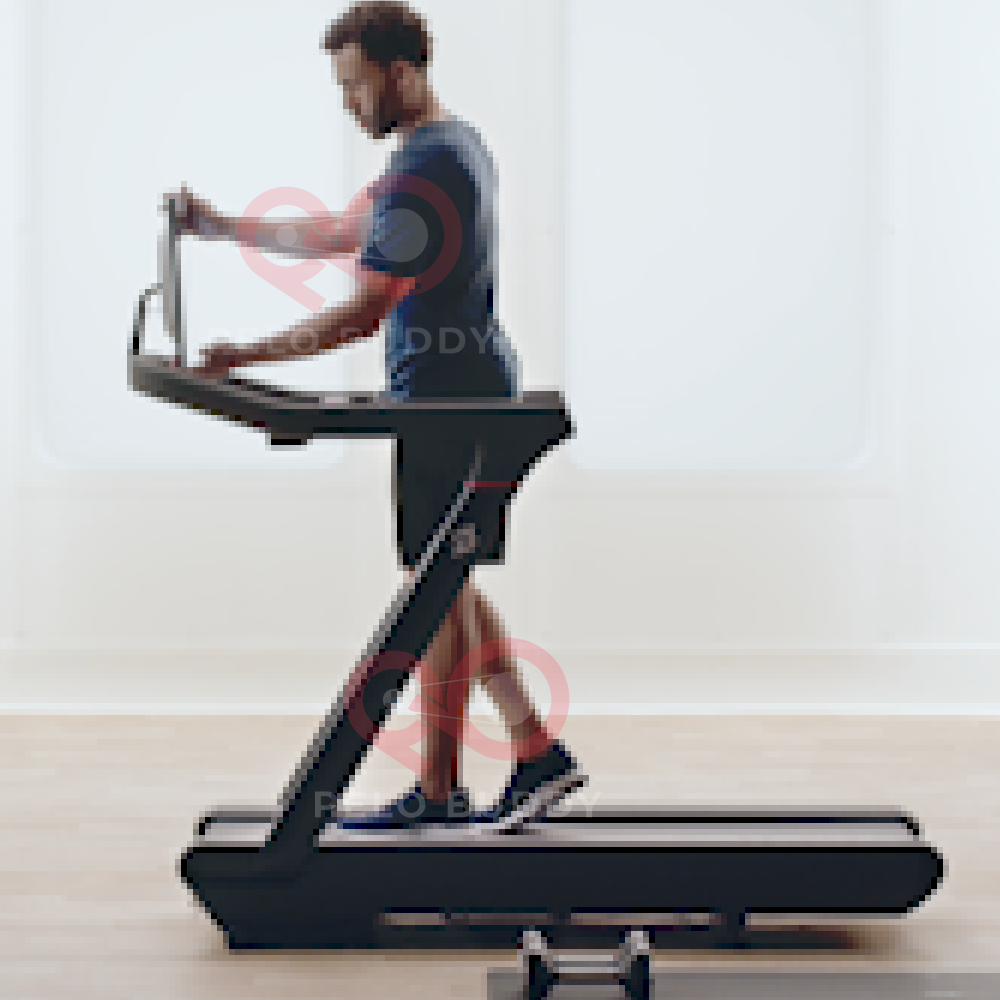 The image today appears to show what will be the new, “better” tread. In addition to being lower cost, it is also expected to be slightly smaller. This is the model that would be made available in international markets like the UK, Canada, & Germany (in addition to being available in the US). Unfortunately, the image sent to us was not a high quality / full resolution image, and thus has been scaled up to make it easier to see. However, we can still make out a few details as we await for better images.

We have a special Pelo Buddy TV Breaking News episode, looking at the changes, or read on for the details!

One detail that has been expected for a while is that the Tread will have a smaller monitor – measuring at around 23.8″ instead of the current tread’s 32″ monitor size. We can see this smaller tablet on the new tread. In addition to the differing size, the new tablet is also expected to have a NFC chip and support GymKit – which would mean better integration with both Apple Health and Apple Watches. This same tablet is expected to be used for the upcoming premium Peloton bike as well, so that is an upgrade you can expect on new bike too when it comes out.

The current treadmill has support rails / arm bars that go flat all the way to the front of the Tread, where the tablet then connects. On the new Tread, we can see that the arm bars actually end up angling upwards towards the front of the tread – it would seem this would be to bring the new smaller monitor closer to eye level. In addition, it appears the support arms are also slightly smaller than the current generation – possibly due to not needing to stabilize the larger size screen?

One other detail that isn’t confirmed, is that in the new Tread the tablet might be adjustable – is the user in the image rotating/adjusting the screen? Will Peloton be adding the ability for the monitor to swivel around so that it is easier for bootcamp/strength/yoga users to use the Tread tablet to do these workouts?

One other expected detail is that the new lower cost Tread will not have the same slats as the premium Tread, and instead use a traditional belt (although it might use the same material). We are not able to confirm 100% from this picture if this is the case – however, in a call with analysts earlier this year, Peloton’s CFO confirmed that a change from slats to belt would be one way for Peloton to bring the cost down. It would also appear that the track surface might be slightly shortened as well – though impossible to confirm from this single picture. We expect specs to be released as soon as the announcement is officially made and can confirm then.

The timing of this Tread release coming soon also coincides with the recent news that Jess King is expected to begin teaching tread classes soon too. It’s possible that the Jess King announcement will be made at the same time the new Tread is officially announced.

With this image surfacing today, we expect more details to come very quickly, as well as an announcement soon. We’ll continue to post updates as we have them!