A patent related to an indoor rower was filed on January 3rd, 2018 and granted on July 4th, 2019. Why is this significant? Because the company who filed the application for the patent was Tonic Fitness Technology – the same company that was acquired last month by Peloton.

The patent itself is not for an entirely new rower. It relates specifically to how the cable would rewind after a pull was completed – due to an elastic band wrapped around a pulley. One of the main benefits to Peloton/Tonic’s approach according to the patent is to make assembly easier and manufacturing costs lower. Although the images contained in the patent do not show the trademark large screens the Peloton community is used to, there are plenty of spots it could be attached in future designs (and wouldn’t necessarily have to be shown as part of this patent application).

It is worth noting that just because a patent was filed does not mean that the product will definitely be made & become Peloton’s next new product. That said, if and when Peloton releases a rowing machine, they will have the interesting position of not being first to market. Hydrow has released an well-reviewed indoor rower with a growing library of live classes, and an active community. Given Hydrow has a head start in the rowing market, Peloton might be forced to price a potential rower more competitively than they otherwise would.

You can check out our portal with news, information and potential release date of a Peloton Rower here, and we’ll keep posting information as it becomes available! 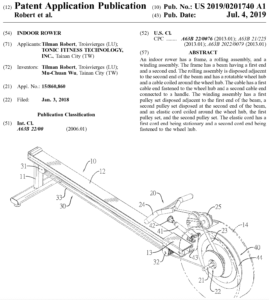 3/24 – Bradley Rose is confirmed as the newest Peloton coach.
3/22 – Four acquisitions are confirmed by Bloomberg today: Otari Mat, Peerfit, Atlas Wearables, and Aiqudo
2/27 – Peloton had another large class purge. See how many classes were removed by instructor
2/24 – New Coach Rumor: Callie Gullickson
2/20 – Was a Peloton Rower spotted in a R&D lab?
2/8 – New Coach Rumor – Daniel ‘Yankee’ McKenna
1/5 – A pause button is being researched with some members at Peloton
12/17 – New Coach Rumor – Mariana Fernandez
11/13 – First impressions & hands on review of the new lower cost Peloton Tread
9/10 – We have a hands-on demo & review of the new Bike+ and all the new features