As Peloton has become more popular, more and more locations are starting to include Peloton equipment in their gym, and this includes cruise ships! Not every cruise line is embracing Peloton though, but we’ve gathered up a few of the cruise lines & ships where you can expect to find Peloton equipment. You’ll need to check with the cruise line for specifics on whether they have both the bicycle and treadmill, or just one device.

The Celebrity Edge cruise ship has 5 bikes in their fitness center. They have both SPD clips and toe cages. 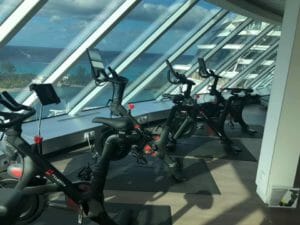 As of August 2021, the Celebrity Summit cruise ship had at least 3 Peloton bikes available in the gym.

As of July 2021, the Celebrity Silhouette cruise ship had at least 3 Peloton bikes available in the gym.

As of August 2021, the Celebrity Millennium cruise ship had 6 Peloton bikes available in the gym.

The Celebrity Apex will be the newest ship in the fleet. Celebrity Cruise Lines customer support has emailed guests who inquired stating that the ship will have Peloton bikes. Once sailings officially start we will confirm how many bikes are onboard.

Like her sister ship, the Celebrity Apex will have Peloton bikes in the gym on board. We wish you happy sailing and cycling!

At this time none of the rest of the Celebrity fleet has Peloton equipment, including Celebrity Reflection, Celebrity Eclipse, Celebrity Solstice.

The NCL Norwegian Cruise Lines Bliss had 2 bikes in the fitness center, and both had SPD clips & toe cages.
As of January 2019 there are conflicting reports that the bikes on the Bliss have potentially been temporarily removed due to internet streaming issues. As of September 2019, the bikes were still reported to be removed. As always, please be sure to double check with the hotel or cruise line before booking! 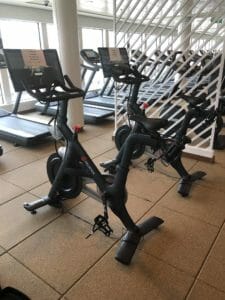 No Carnival cruise ships have been reported to have Peloton equipment at this time. This includes the Carnival Horizon, Carnival Vista, Carnival Panorama, Carnival Breeze, Carnival Dream, Carnival Freedom, and more.

At this time there are no reported Disney ships with Peloton bike or treads, including the Disney Dream, Disney Fantasy, Disney Magic, or Disney Wonder.

As of October 2021, it was reported that the Virgin Scarlet Lady did not have any Peloton bikes. It is not yet known whether other ships in the Virgin fleet, including Valiant Lady, will have Peloton bikes.