Sources have shared with us that Peloton has changed the pay structure of their showroom employees, resulting in a large pay cut, in the range of 30-60% or more in some cases for these retail employees.

Last month, on November 4th, Peloton held their Q1 2022 earnings call. During the call, Peloton announced that they were revising their fiscal year 2022 outlook, due to softer than expected demand and sales. As a result of this, the stock price dropped by nearly 30% overnight.

During this earnings call, Peloton executives detailed some savings they were trying to make across the company:

In response to our revised sales and margin outlook for fiscal 2022, we have identified material savings across our operating expenses. So, some of these actions may take a quarter or two to show improvement. Some of these identified areas of savings include making significant adjustments to our hiring plans across the company, optimizing marketing spend and limiting showroom development, identifying areas of efficiency, improvement in member support and streamlining our product development teams, while maintaining a focus on new products and expanding software features.

The next day, Peloton held an all-hands meeting, where, among other things, an immediate hiring freeze was announced.

However, the hiring freeze was not the only cost savings measures put into place. Multiple sources have confirmed to us that Peloton also took steps to drastically change the pay structure for their retail employees who work in showrooms. For many employees, this resulted in pay cuts in the range of 30-60% or more.

These pay changes were announced and put into place with less than a week’s notice in early November – the same week the hiring freeze was put into effect. The biggest change Peloton made was to reduce the amount of commission employees received for each Bike or Tread sold. This is reported to have impacted Sales Specialists, Assistant Showroom Managers, Showroom Managers, and Regional Managers. To try to mitigate this, the base hourly pay was bumped up, and a monthly bonus put into place for hitting sales targets – however, this still results in a large net overall decrease in pay for the employees.

Prior to November, a retail employee would have a commission structure where they received $75 per Tread or Bike sold until they hit their monthly goal, and after that, $100 per Bike or Tread. With these changes, that commission per Bike or Tread has been dropped to the $10-$25 range per device sold – regardless of whether you hit your sales targets or not. A new addition is a bonus, or monthly incentive. If an employee hits their sales target, they might receive a $500 bonus for the month. If they are able to sell 150% of their sales target, they would get a $1,000 bonus. If they do not hit their full sales target, employees might receive a portion of this bonus as “a courtesy.” On top of this, employees were given a bump in hourly wages.

One additional issue employees report is that the sales targets are based on trends from the previous year, and are therefore not achievable. Most of them were set by looking at the November 2020 data, when Peloton was having a massive boost in sales. These numbers are reported to not have been updated to take into account the softer than expected sales that caused Peloton to reduce their outlook. This means the majority of the employees are not going to hit their sales targets, and receive the maximum bonus (or any bonus at all). On top of not selling enough devices to earn a bonus, the softened demand simply means less people buying Bikes or Treads, which means less commission and less pay.

For many employees, it’s not simply the pay cut that is impacting them, but the timing of it. As one can imagine, Black Friday, Christmas, and New Year’s are one of the most popular times to buy fitness products – so these cuts in commission are right when many employees would be making the majority of their sales for the year. Several employees report that they typically might expect to make more than 50% of their annual income in this 3 month period – which will now be a much smaller dollar amount due to the cut in commissions.

Management has reportedly projected that employees might make up some of the difference through sales of apparel & warranties. However, if demand is softening and sales are dropping, that is less products to sell warranties to.

Here is a concrete example of how these commission cuts might impact a Peloton showroom employee. Note that exact numbers will vary based on specific experience, position, and location, however, the overall structure & trend of these changes have been confirmed to us by multiple sources. 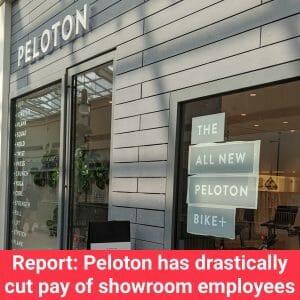 Assume a Peloton Sales Specialist makes $20/hour (again, specific numbers might be lower or higher for different roles & locations). The goal for this employee is to sell 65 devices (Bike, Bike+, or Tread). Over the course of the month, this employee might work 120 hours (keep in mind that Peloton was staffing up over the course of the year as demand grew, so not all sales staff will be working 40 hours a week). In this example, the employee goes past their goal and sells 85 devices.

Under the new pay changes, their pay could be drastically different. Assume this employee gets a 10% hourly increase to $22.00. Their commission is changed to $18/device – roughly the middle to higher end of the reported new ranges. Under the new structure, it doesn’t matter how many you sell, or if you go over your goal – that’s the new commission.

The exact % pay cut will vary on a number of factors – from what each employee’s sales goal is, to their hourly rate, to what their adjusted commission rate is. However, the trends are the same – starting last month, most showroom employees were faced with a large pay cut, as a result of cost savings measures Peloton put into place in the face of softening sales and demand.

Several sources indicate that during this peak-buying holiday season in a normal year, numerous employees might expect to bring in roughly $10,000 a month in pay under the old system. With the new commission structures in place, current number of hours worked, current sales trends and sales goals, these same employees might be lucky to see $3,000 in their paycheck.

It is not clear how long these new pay structures will remain in place for.

Note – An earlier version of this article stated that earlier this year Peloton announced that they were raising their minimum wage to $19/hour as part of their Peloton Pledge. However, that only applies to non-commissioned employees so is not applicable to all retail staff.