The first edition of Pelothon ended on Sunday night, with more than 324,000 members of the Peloton community having taken part in it (for context, there are around 2.5 million total Peloton members). This means about 12% of the overall Peloton community took part in the challenge. Officially, Pelothon was not a competition and there are no winners. Unofficially – the data says that based on the percentage of each team who successfully completed all 4 weeks’ worth of challenges, #BreakthroughCrew came out as the unofficial team winners for Pelothon 2020.

The real winners of the challenge are the 4 charities, who between them, will receive $1 million dollars. The charities for Pelothon 2020 were Food Bank For New York City, The Trussell Trust, Die Tafel, and Daily Bread Food Break. Each organization received a donation of $250,000 each.

If you missed out on the challenge, or are curious what the rules and specific guidelines were, our Pelothon 2020 Guide is a good resource to check out! For anyone who is interested in some detailed completion stats and progress throughout the challenge, we will break down the overall, and weekly, data below. Note that the data contained here comes from Peloton’s Pelothon 2020 Recap page, as well as the individual week pages. 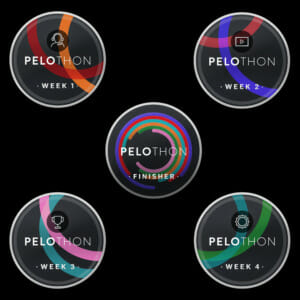 Given that each team had a different number of participants (members were able to pick their own team), the most fair way to rank the results is based on % completion. So to calculate the overall results, we look at the percentage of members from each team who completed the requirements for all four weeks.

Overall, #BreakthroughCrew had the highest completion rate over all four weeks, followed by #NoLimitLegion and #GritAndGraceGang. We’ll now look at each of the individual weekly statistics and results.

Requirements: Take 1 class with every coach from your team

In addition to the number of members who successfully completed the Week 1 requirements, Peloton also shared the total number of classes with their own coach that were taken by each team. With that data, we are able to calculate the average number of classes (with coaches from their own team) taken by each team member during the week. Even though half of the teams had five coaches, while the other half had six, this didn’t really shake up the results for the week that much, with only #GritAndGraceGang and #HouseOfShine swapping positions.

Week 2 ended up being the most “difficult” week of the challenge, based on the percent of each team who completed the week (overall completion rate for all teams was 42.63%). This is likely due to people having difficulty finding live classes that worked for their schedule.

Requirements: Work out 5 days this week

Week 3 had the highest overall completion rate out of the four weeks, with the average across all teams being 48.37%

Similar to the previous week, members also had to opt into a challenge for Week 3. Here is the breakdown of how many and what percent of each team opted into the Week 3 challenge.

Finally, we’ll again use the number of team members who opted into Week 3 to re-rank the overall Week 3 results, basing the percentages on opted in numbers, instead of overall numbers. With this new calculation, #GritAndGraceGang and #HouseOfShine swapped third and fourth spot for the week.

Week 4’s requirement was in theory the simplest: you simply had to take one class, as long as it was one of the six “Pelothon 2020” classes. However, some members probably dropped out of the challenge as the Pelothon went on, otherwise one would imagine Week 4 would have had the highest completion rate.


For Week 4, Peloton shared the number of Pelothon 2020 classes that were taken by each team. If members took the same class twice, or multiple ones, this helped contribute to the team numbers.

We can also calculate this based only on the number of people who completed the challenge – or took at least one class. This excludes people who might have dropped out of the challenge by this point, or just didn’t have time this week.

And with that, Pelothon 2020 is a wrap! One interesting statistic is that Peloton shared the top 3 classes for each team during the challenge (which you can browse at your leisure here). However, for all 6 teams, one of the 3 classes was Cody Rigsby’s 30 minute Britney Spears ride. Even with the friendly team rivalry going on, it appears that there are some classes that members had to put the rankings aside for and come together to workout on!

We can imagine this will be something Peloton will try again in the future. Stay tuned for details when they do!