Last month, the CPSC issued an urgent safety warning for the Peloton Tread+, and urged customers to stop using it. Shortly after it came out, Peloton CEO John Foley issued a statement saying there were no recall plans, saying he “assure[d] you that we have no intention of doing so. The Tread+ is safe”

Today, that is changing as Peloton is initiating a voluntary recall for both the Peloton Tread and Tread+. Peloton has also put out a press release about the recall. Although both products are being recalled at the same time, they are for different reasons. The Tread+ recall is due to safety risk of being sucked under the Treadmill. The Tread recall is due to a high risk of the screen loosening or falling off.

In addition to announcing the voluntary recall, Peloton also shared they are temporarily stopping new sales of the Tread+ “and continues to work on additional hardware modifications”. The page to purchase a Tread+ has been removed from Peloton’s site.

You can see the formal recall notice for the Peloton Tread+ here. The Tread+ recall is due to reports of injuries of objects, people, and pets being sucked under the Treadmill.

For the Tread+, this is the option on the recall:

Consumers should immediately stop using the recalled Tread+ and contact Peloton for a full refund until November 6, 2022. Consumers who return the Tread+ treadmill after that date will receive a partial refund. Peloton is offering consumers who do not want a refund the option of moving the Tread+ free of charge to a room where children or pets cannot access the treadmill, and is implementing software improvements to the product to automatically lock the Tread+ after each use and prevent unauthorized access by assigning a 4-digit passcode that will be required to unlock the Tread+.

For the newer Tread, this is the option on the recall

Consumers should immediately stop using the recalled treadmills and contact Peloton for a full refund. Peloton is offering consumers who do not want a refund the option of waiting for a free inspection and repair that will secure the touchscreen to the treadmill to help prevent future incidents. CPSC and Peloton will provide an update when a timeline on that repair is made available.

Peloton and the CPSC put out a joint statement today, stating:


Consumers who have purchased either treadmill should immediately stop using it and contact Peloton for a full refund or other qualified remedy as described in the press releases below.

Peloton CEO John Foley had a quote in the article, stating:

The decision to recall both products was the right thing to do for Peloton’s Members and their families. I want to be clear, Peloton made a mistake in our initial response to the Consumer Product Safety Commission’s request that we recall the Tread+. We should have engaged more productively with them from the outset. For that, I apologize. Today’s announcement reflects our recognition that, by working closely with the CPSC, we can increase safety awareness for our Members. We believe strongly in the future of at-home connected fitness and are committed to work with the CPSC to set new industry safety standards for treadmills. We have a desire and a responsibility to be an industry leader in product safety.”

In the recall notice, it was reported the Peloton has sold around 125,000 Tread+ units, and around 6,500 new Tread units. 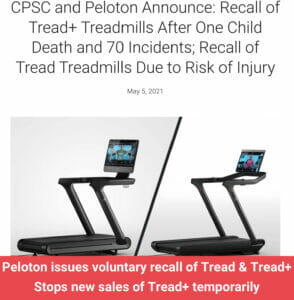