The U.S. Consumer Product Safety Commission (CPSC) is warning consumers about the danger of popular Peloton Tread+ exercise machine after multiple incidents of small children and a pet being injured beneath the machines. The Commission has found that the public health and safety requires this notice to warn the public quickly of the hazard. The urgent warning comes less than a month after Peloton itself released news of a child’s death by a Peloton Tread+ and CPSC’s announcement of an investigation into that incident.

The warning references the death of a child from a Tread+, which made headlines last month and promoted an open letter from Peloton CEO John Foley

The CPSC warning goes on to highlight why it sees the Peloton Tread+ as hazard – and also why simply removing the safety key might not be enough to fix the issue.

To date, CPSC is aware of 39 incidents including one death. CPSC staff believes the Peloton Tread+ poses serious risks to children for abrasions, fractures, and death. In light of multiple reports of children becoming entrapped, pinned, and pulled under the rear roller of the product, CPSC urges consumers with children at home to stop using the product immediately. This video demonstrates the hazard to children posed by the Tread+. [Warning, video content may be disturbing to some viewers.] It is believed that at least one incident occurred while a parent was running on the treadmill, suggesting that the hazard cannot be avoided simply by locking the device when not in use. Reports of a pet and objects being sucked beneath the Tread+ also suggest possible harm to the user if the user loses balance as a result.

Since the accident in March, Peloton has been making a point to have the instructors end classes with taking the safety key out – as well as mentioning to be sure kids & pets aren’t near the tread prior to starting a workout.

The CPSC bulletin goes on to recommend these concrete steps for what Peloton Tread+ owners can do to limit the risks.

The Consumer Product Safety Commission’s unilateral press release about the Peloton Tread+ treadmill is inaccurate and misleading. The Tread+ is safe for Members to use in their homes and comes with safety instructions and warnings to ensure its safe use. Like all motorized exercise equipment, the Tread+ can pose hazards if the warnings and safety instructions are not followed. The Tread+ is not for children under 16. Peloton warns Members not to let children use the Tread+ and to keep children, pets, and objects away from the Tread+ at all times. Any owner of a treadmill – whether made by Peloton or not – should follow these warnings, as they are included in the applicable safety standards, which the Peloton Tread+ meets.”

The Washington Post had reported late last night that this safety notice had been under discussion, however, the CPSC agency and Peloton had been in discussion over wording and timing.

They shared that the agency had issued a subpoena to Peloton in order to find the contact information & name of the child’s family who had died in March so they could investigate the issue. Peloton had refused the initial request for privacy reason, and requested to be subpoenaed in order to turn over the info.

The two sides also are clashing over whether Peloton’s treadmills need to be taken off the market. The company and regulators have been negotiating this week over the wording and timing of an agency warning to alert consumers to potential dangers posed by the company’s Peloton Tread+, a $4,300 exercise machine, these officials said. A new safety warning from the CPSC is expected to be posted as early as Saturday, officials said.


“This doesn’t happen with other treadmills,” said an official familiar with the case, explaining why the CPSC was alarmed by reports of victims being pulled under the machines and suffering injuries that included broken bones and head trauma. “It is a different hazard pattern than is typically seen.”


A Peloton spokeswoman said in a statement to The Washington Post that the company “does not believe a recall is necessary” and that the treadmill “is safe for use when the warnings and safety instructions we provide are followed.” Peloton also has issued repeated safety warnings to its customers since it learned of the incidents last month, company spokeswoman Jessica Kleiman said.


“Peloton is still seeking to jointly work with CPSC to urge [its customers] to follow all warnings and safety instructions,” Kleiman said in the statement.

Note that at this point this is not a safety recall, but a public safety notice. As The Washington Post shares, “The CPSC needs a company’s cooperation to recall a product. Almost all recalls are voluntary, except in rare cases where the agency sues to force the issue.” As you can see from Peloton’s statement included with the safety notice, they disagree with the assessment. At this point, it is not clear if the the CPSC will sue Peloton in order to try to force a safety recall.

The company is troubled by the Consumer Product Safety Commission’s (CPSC) unilateral press release about the Peloton Tread+ because it is inaccurate and misleading. There is no reason to stop using the Tread+, as long as all warnings and safety instructions are followed. Children under 16 should never use the Tread+, and Members should keep children, pets, and objects away from the Tread+ at all times.

It then goes on to discuss Peloton’s response to the CPSC:

While Peloton knows that the Tread+ is safe for the home when used in accordance with warnings and safety instructions, the company is committed to taking whatever steps are necessary and appropriate to further inform Members of potential risks and remind them of measures they need to take to safeguard themselves and others in their households. Peloton will also continue to work to develop industry-leading safety features for connected home exercise equipment.


Peloton invited CPSC to make a joint announcement about the danger of not following the warnings and safety instructions provided with the Tread+, and Foley asked to meet directly with CPSC. CPSC has unfairly characterized Peloton’s efforts to collaborate and to correct inaccuracies in CPSC’s press release as an attempt to delay. This could not be farther from the truth. The company already urged Members to follow all warnings and safety instructions. Peloton is disappointed that, despite its offers of collaboration, and despite the fact that the Tread+ complies with all applicable safety standards, CPSC was unwilling to engage in any meaningful discussions with Peloton before issuing its inaccurate and misleading press release.

Not familiar with the CPSC? Here is a description of the federal government agency:

CPSC is charged with protecting the public from unreasonable risks of injury or death associated with the use of the thousands of types of consumer products under the agency’s jurisdiction. Deaths, injuries, and property damage from consumer product incidents cost the nation more than $1 trillion annually. CPSC is committed to protecting consumers and families from products that pose a fire, electrical, chemical, or mechanical hazard. CPSC’s work to ensure the safety of consumer products – such as toys, cribs, power tools, cigarette lighters, and household chemicals – contributed to a decline in the rate of deaths and injuries associated with consumer products over the past 40 years.

If the agency pursues trying to force Peloton to recall the Tread+, we will share that information as it becomes available.

You can see the full notice & warning on the CPSC website here. 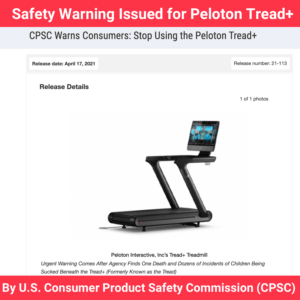